While the trackpads that come with recent Mac portables are great, there are times where you need a real mouse.

So I sat down and came up with a set of requirements that I consider a ideal mouse.

For programmability I don't need driver level support, since as long as the button registers Steermouse lets you do more than any vendor provided driver does, consistently across mice.

Having a lot of buttons is great, which I found out by using a Kensington Expert Mouse for the last 5 years.

Except for the fact I found out that these were apparently unrealistic requirements.

TL:DR; Stay away from Razer at all costs.

Still here? Then let's get on with the story. So after going through the list of mice available in the market, I quickly found a mouse that met my criteria.

Not to mention that you had two operation modes, Bluetooth and USB. It comes with a nice USB cable that transforms your mouse into a USB mouse, so you can quickly plug it into machines which you haven't paired with and use it just like that. 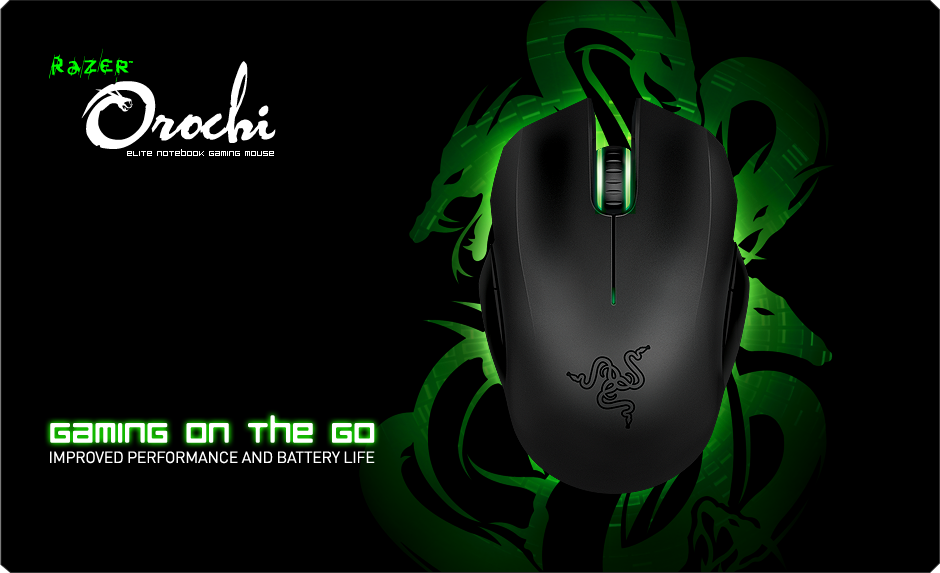 Bluetooth, enough buttons, and looks decently nice. Except you don't get to see the ugly side until you actually purchased and started using the mouse.

Without the drivers, button 5 and 6 are useless.

Button 5 and 6, without the Razer drivers will generate a mouse input event and internally adjust the DPI. Without the drivers, button 5 and 6 are useless, unless you enjoy having your mouse cursor speed change randomly.

So one would say, "then just install the drivers". Except the drivers are possibly the worst thing a hardware vendor could every imagine.

The name of the software you see when you go to the download page is this: 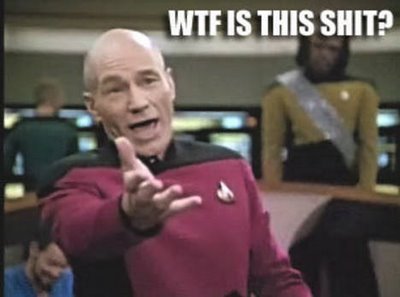 Mhm. Cloud based drivers with configuration sync. Sounds awesome if this was done nicely...

Razer Synapse 2.0 is possibly the epitome of bad mouse driver engineering. I can't speak for the Windows version, but the Mac version seems to have bugs that have never been addressed or acknowledged, and their customer support, like most game related product customer support will default to template answers no matter how much detail you provide.

In my case, I had problems with the RzUpdater process constantly hanging when you drop off of the network while it was apparently "updating". As there is no visual indicator or a mechanism to actually block this, so I basically had to cross my fingers that my mouse would work whenever I had to close my laptop lid.

When this process hangs, your mouse button configuration rolls back to system defaults - so all of your configuration is gone. Also, button 5 and 6 roll back to it's original behavior as a DPI switcher.

Otherwise I had to force kill all the Razer driver userland processes and start them again. Many attempts to get a fix/workaround for this issue ended up nowhere.

This isn't isolated to a single setup, as I've experienced it on three different portable machines. The only machine where it worked sort of fine was a desktop computer. Surprise.

Here is a example of support tickets and the replies I have got.

Ticket: Button mappings will randomly "revert" back to system defaults.

Ticket: The RzUpdater process hangs, when you close and open the lid a couple times.

I have filed tickets using other usernames, no difference. Also, the amount of information you can put into a single ticket is limited to a character count that simply does not allow you to provide much detail.

Eventually, this was my answer: 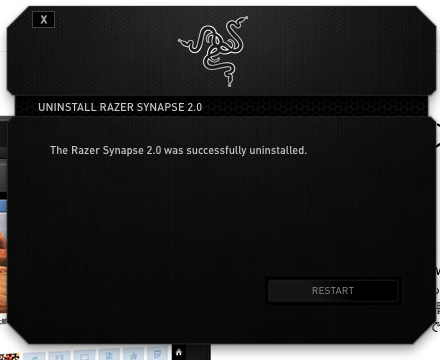 See the restart button? You are forced to to reboot both when you install and uninstall. No such thing as "reboot later" here.

One day I may take the Orochi apart and see if there is a hardware mod that I can try to remove the DPI switching feature from the buttons.

To start off, this mouse has a horrible name. It shares a name with a popular band which makes searching information about this mouse quite annoying.

Then you have stuff like the Go programming language or the gold linker, so I guess this isn't all that bad.

Aside from the name complaint, I found this mouse to be a even better candidate for replacing the ill-fated Orochi which has been collecting dust for the last couple months.

Cool design, 10 (!) buttons (of one is explicitly a DPI switch, unlike the evil that Razer pulled off), a adjustable palm rest you can pull out, and a USB dongle so you can use it without Bluetooth (e.g. in my case, connecting it to a embedded Linux board) this looked like the mouse I have been waiting for. 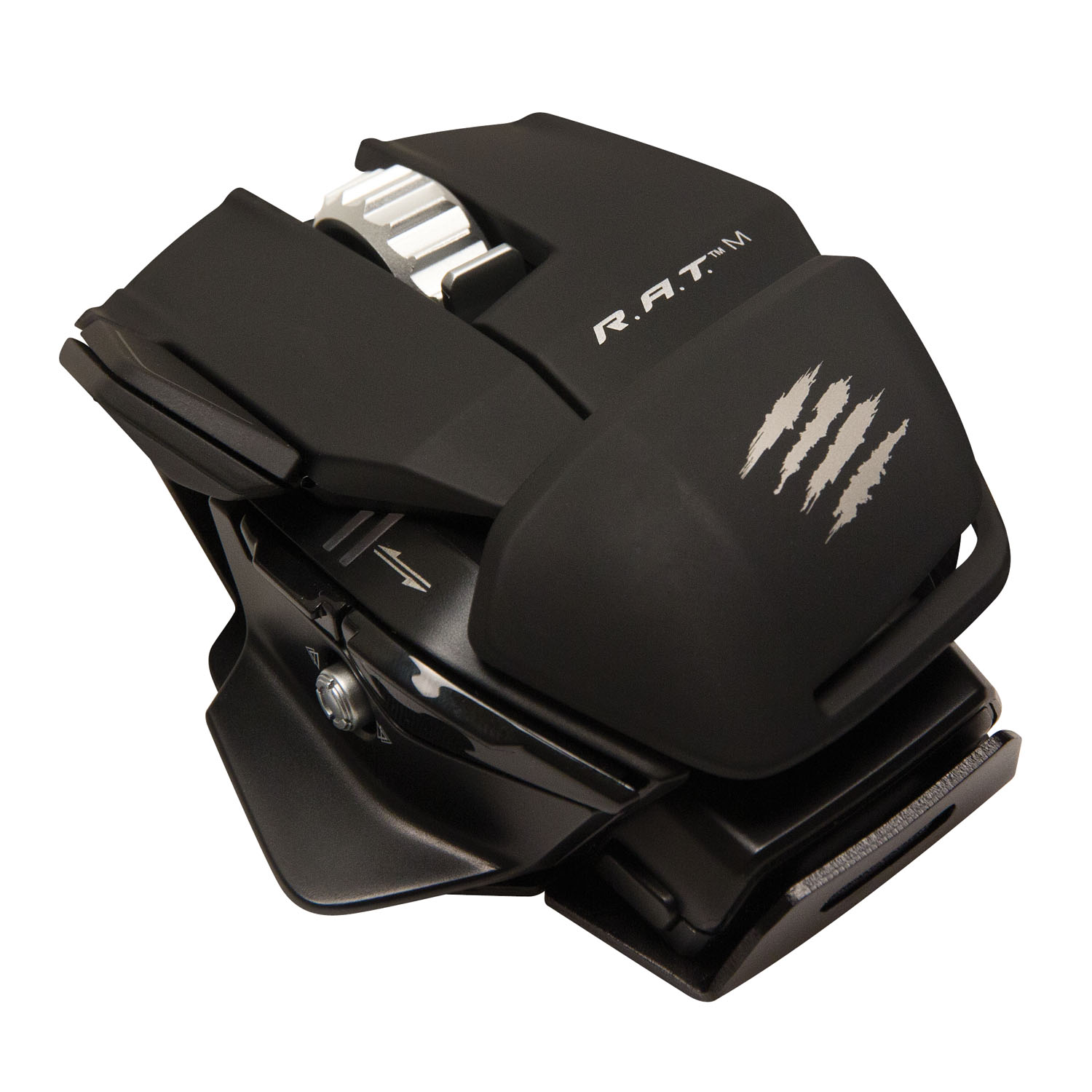 The price was a bit steep, but since something under my criteria is so hard to come by I ordered it without hesitation. I have a friend who owns a R.A.T.9, and from trying his mouse I had a pretty good idea of what I was getting.

Except for one little catch which isn't well advertised anywhere. Here is a illustration of this problem. 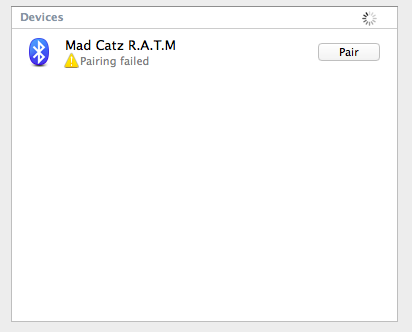 This device only has official support for dongleless pairing via Bluetooth on Windows 8.

The device shows up on your Bluetooth dialog, but will refuse to pair with your computer.

What I know is that this uses Bluetooth 4.0 LE, and recent Macbooks are supposed to be capable of that. Or at least the largest amount of complains is that the mouse isn't visible at all - in my case it's visible but that doesn't make a difference at all. 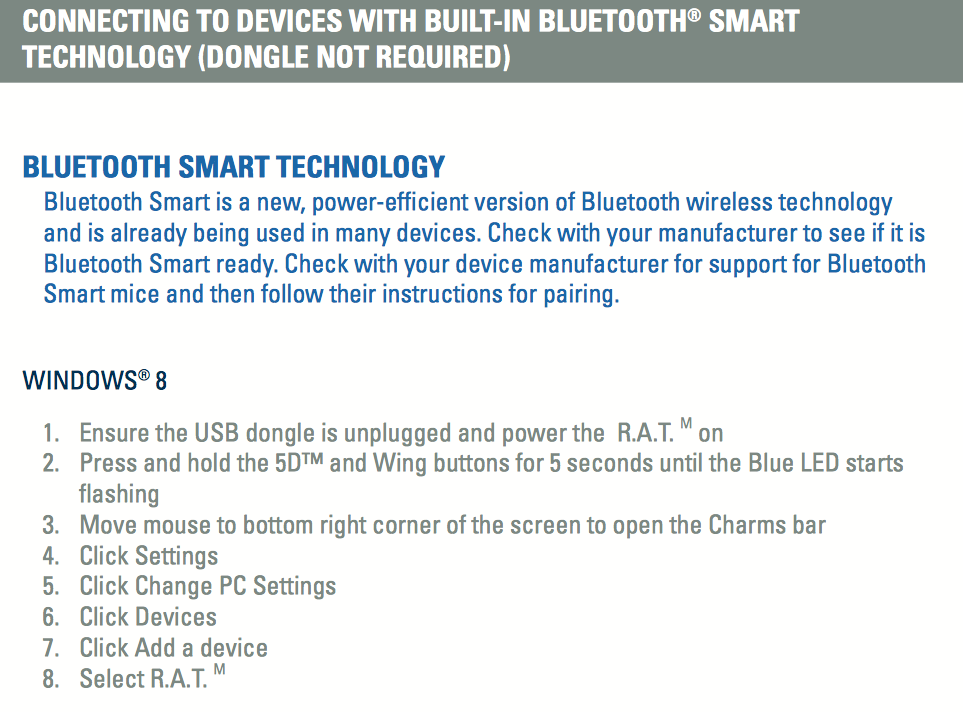 Using this as a basis, I found out a simple workaround to make it "sort of" work on a Mac. Basically, even if the device is visible in the pairing dialog that doesn't necessarily mean that you can pair with the device.

You have to force the device into a very specific pairing mode, otherwise it will never pair.

This is not written anywhere in the manual nor provided in any customer FAQ. Either Mad Catz is unaware that this even works, or they simply don't care. At least it's explicitly noted in every instance I've seen that Windows 8 is the only OS that supports dongleless pairing.

Under a assumption that this method is fairly reliable - if you have the same requirements as me this is the mouse to get. I heard rumors that their customer support is as bad as Razer, so if you need good customer you might want to take that into regard though.

I'll cover this in another post, as covering it in a separate post will possibly make it easier to search later.